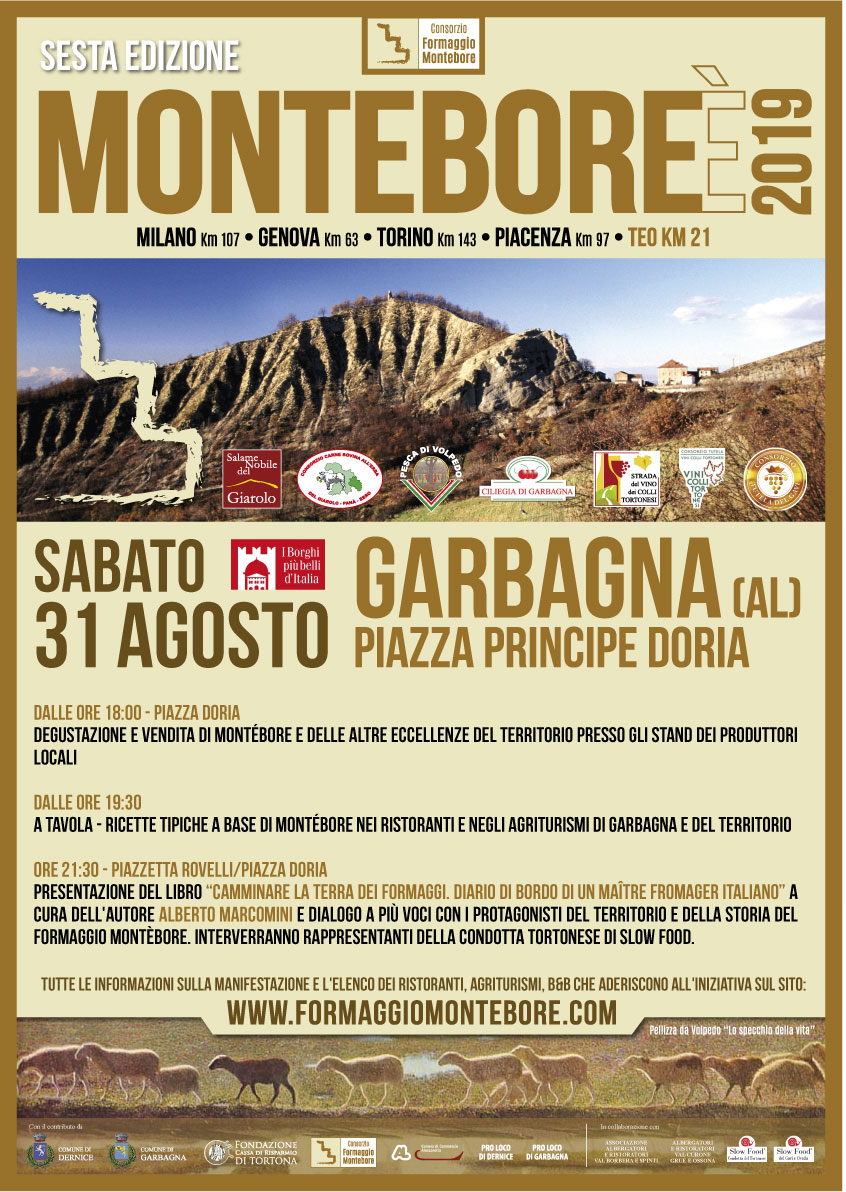 The sixth edition of MONTEBOREÈ will be held on Saturday 31 August in Garbagna and Sunday 1 September on the fortress of Montebore di Dernice.

The protagonists are agricultural and artisanal activities that in the last twenty years have been recovered and revitalized thanks to the commitment and work of local entrepreneurs and administrators. The villages of Garbagna and Montebore “watch over” the territory that produces Montebore cheese, Salame Nobile del Giarolo, grass meat, white truffles from the lands of Giarolo, cherry from Garbagna, peaches from Volpedo, white wines and reds from the Tortona hills. Walking through the streets of the villages, you will be able to appreciate the work and the ancient knowledge of those who lived and who, even today, live and preside over this strip of the Apennines.

The event was created to be an occasion for celebration and discussion on the territory and its dairy products: this year’s edition hosts Alberto MARCOMINI, an internationally renowned dairy expert, Filippo BARBERA Professor of Local Development at the University of Turin, the Slow Food Convivium from Tortona, Gian Paolo REPETTO “winemaker” of Timorasso, but also producers and protagonists of the territory because the party is designed especially for them.

Montebore is an excellence resulting from an archaeological work in the recovery of ancient knowledge and flavors and brings with it a history that is grafted into the local one and the territory. The protagonists of this comparison will taste and comment, on the stage of the open-air theater of Garbagna, the cheeses presented by each producer of the territory, reflecting on a wide spectrum of contents: the oldest history of the territory, the recovery of the ancient dairy art for the production of high quality cheeses, the socio-cultural and food and wine aspects of the products of a tradition that is very well characterized geographically and culturally.

The first appointment is therefore Saturday 31 August, in Garbagna:

from 18.00: exhibition of local producers in Piazza Doria;
from 9.30 pm Tasting with several voices: protagonists Alberto Marcomini, Filippo Barbera and local actors, in the suggestive corner of Piazzetta Rovelli, natural theater in the ancient core of the village. At the end of the debate, the Appennino di Montebore prize will be awarded to the Friends of Montebore.

The second appointment is Sunday 1 September, in Montebore; starting from 10.00:

in addition to walks, from early morning until sunset, and the animation with donkeys for children by “La Stalla dei Ciuchi” in the Borgo di Montebore the producers will meet. The producers of Montebore together with the producers of Montebore will meet on the old path from the “Rocca” to Palazzo Malaspina, from the “Costa” to “Parogna” in Dernice (AL) to cook and taste those ancient flavors that have characterized the territory for centuries of the ancient “Rocca” of “Folchetto Malaspina”, the sad hero of the historical novel by the nineteenth-century writer Carlo Varese who had identified the remains of the ancient Castle in these places.